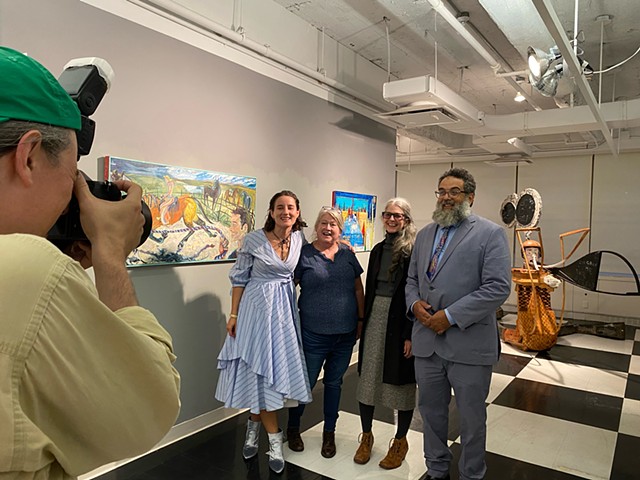 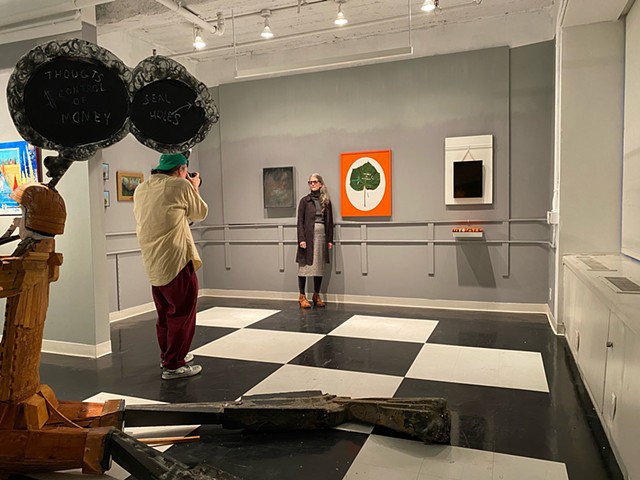 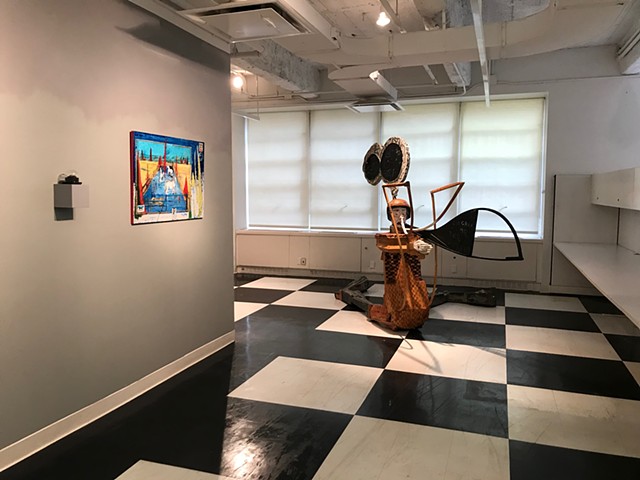 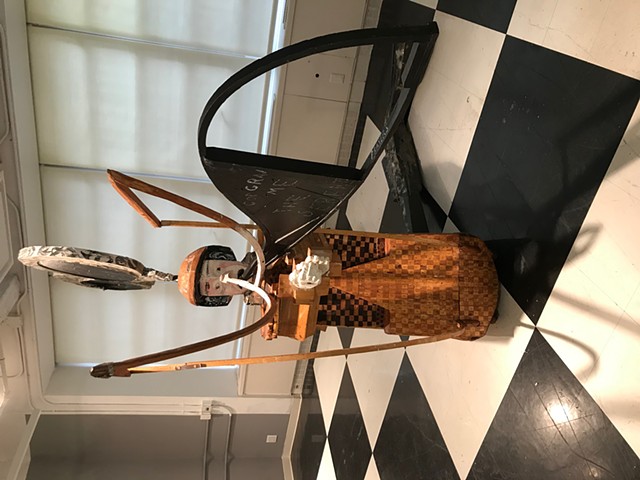 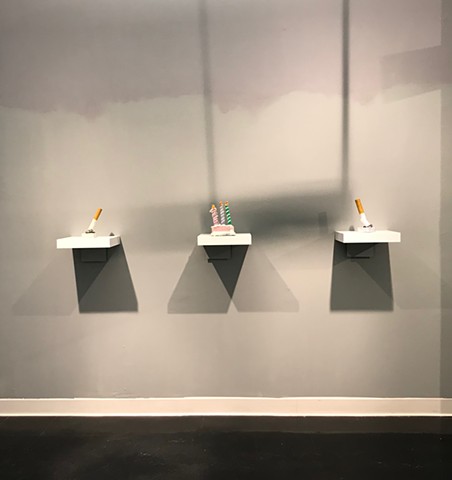 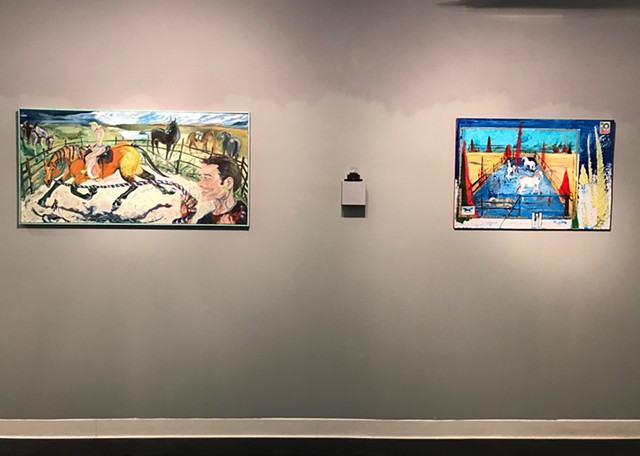 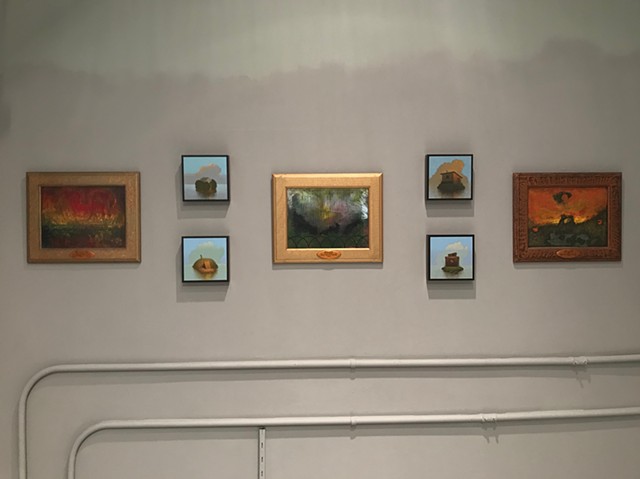 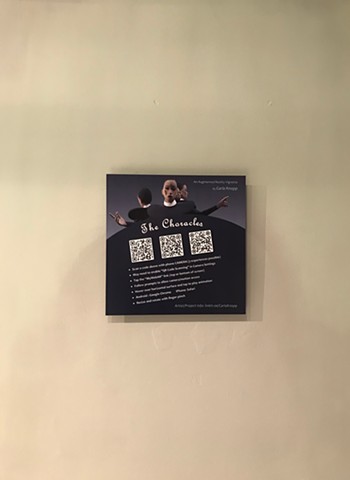 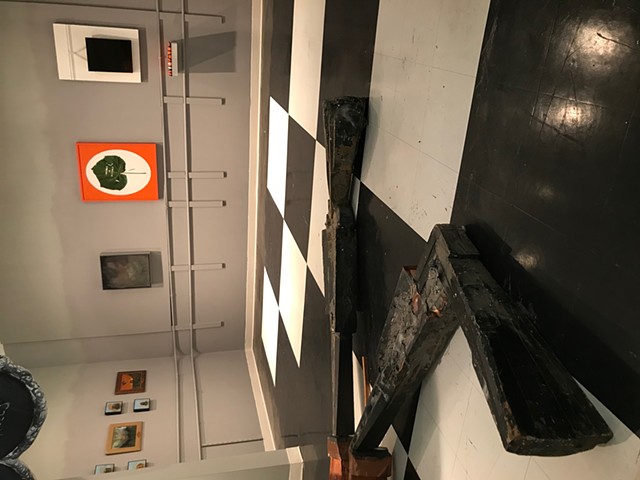 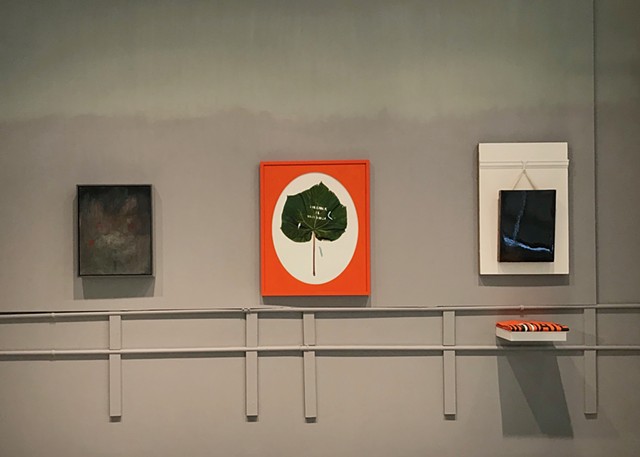 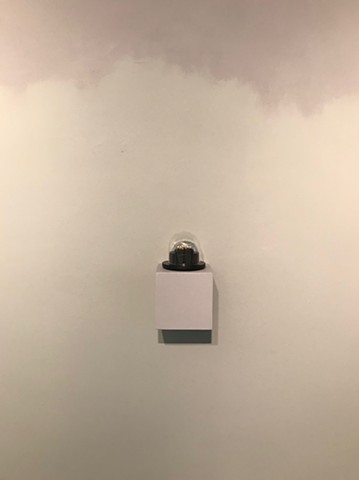 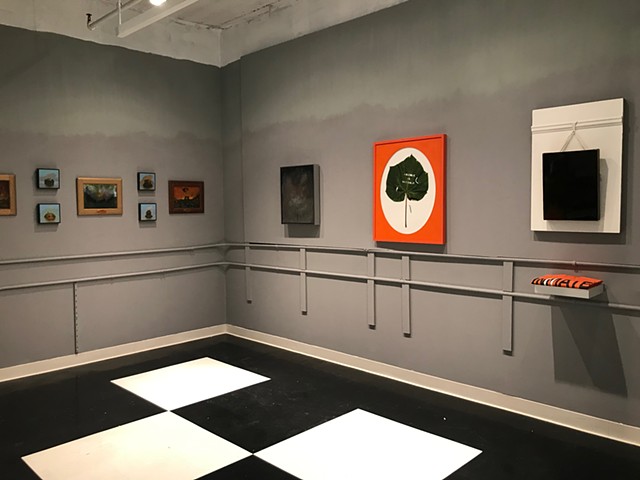 On the End of Every Fork, is a group show of painting, sculpture, and augmented reality video works curated by David B Frye for SPRING/BREAK Art Show NYC 2022 NAKED LUNCH, featuring works by Brian Fick, David B Frye, Mary Gagler, Carla Knopp, Steve Paddack, Gwendolyn C Skaggs, and Martha Vaught. Works in On the End of Every Fork are derived from experiencing the clarity of daily life rather than abstractions of myth and religion. We oppose the good-natured, peopled revelry in Manet’s Le Dejeuner sur L’herbe in favor of a slow burn beginning at the bedrock of human experience, the relationship of man and nature, with imagery that is dreamlike rather than classical as exemplified by Arnold Bocklin’s symbolically laden 1880 painting Island of the Dead.

In his now famous 1959 book Naked Lunch the writer William Burroughs states in his introduction “The title means exactly what the words say: naked lunch, a frozen moment when everyone sees what is on the end of every fork.” Similarly, works in this show present visual accounts of lived experience as in Manet’s 1863 Painting. We take as a counterpoint Gustave Moreau whose paintings of classical subjects like Oedipus and the Sphinx were venerated at the 1864 Salon, the year after the salon rejected Manet’s radical embrace of painting life as it is lived. Moreau’s paintings are identified in J.K. Huysmans’ 1884 novel Against Nature as valuable to the main character, a well-heeled aesthete defined by his possessions. This literary device would be used to haunting effect 100 years later in Brett Easton Ellis’s American Psycho, in which the main character is a man defined by what he owns, not by who he aims to be. The pathology of consumption places us within an arc of culture based in the human relationship with the natural world which has changed in appearance over time but remaining essentially the same, exploitative and empty, grasping to make meaning through familiarity and distant longing. Mary Gagler’s work highlights this condition of meaning acquisition through consumption, her steel sculptures of cigarettes and birthday cakes marking common ritual experiences centering the body and the passage of time.

Nature itself is both venerated and abused. We see a world where coal rolling and Earth Day exist. We see Mother’s Day and spousal abuse. It is true that some people only pretend to love what nurtures them, a situation held in common too often between nature and women; relationships exploited to take what they can, love demonstrated with empty symbolic gestures. Gwendolyn Skaggs illustrates these dynamics of abusive relationships in her work using a wide range of materials, including plants and living insects to document and reveal the processes of narcissistic abuse and the hold of trauma bonds. These works speak to the ways that absence can imply presence, as Bocklin’s bold composition implies vast serene space, Manet’s lively scene is evoked by its opposite. When we gaze into a landscape without people, we, by the act of viewing, become the human figure in that remote place. We might for example be transported towards Bocklin’s towering formations, picturing ourselves entering the island and encountering the unknowable. Steve Paddack references this composition in his Personal Island paintings which offer settings for self-selected isolation in nature in which a mysterious communion takes place, transcending known boundaries to acquire otherworldly wisdom or at least peace.

Carla Knopp whose augmented reality video works are an encounter taking place within a simulated nature, like a visitation from an approaching phase of humanity. We see a mysterious figure whose screams and song introduce an eerie solitude and isolation from nature.

Brian Fick’s painterly work operates at an intersection of craft and spirit, incorporating the painting frame into a crafted whole. Through color and ethereal brushstrokes, Fick conjures metaphysical natural spaces as visual poems into which we plant our own presence. David Frye’s sculpture sees the return of a culture warrior at a prayer luncheon. The machine-like wooden construction shows a figure with Pinocchio-nose overgrown and reincorporated to the figurative system as if the figure is a religio-spiritual juggernaut powered by its own lies.

Martha Vaught, chronicles her impressions of climate change through her real and palpable connection to farming the natural world. Vaught’s lyrical and energetic Equestrian paintings exemplify love of a nature that is steadfast though turbulent. As in Burrough’s book of vignettes, this group of artists share dedication to moments of clarity, and as a result can be read in any order. The artists in On the End of Every Fork share a devotion to the moment of clarity; that place where we all see what is on the end of our forks, the body in nature, binding us together.

I was born in Mildenhall England in 1963. At the time my father was serving in the U.S Airforce. He met my mom by chance, at least according to what lore was shared. He dialed the wrong number, chatted. The dice got rolled and so did my parents. My father was African American and my mother is English. During the early 60’s their relationship would have checked nearly all the boxes needed to be a scandal. When I discovered Art, I was drawn into the hellfire and brimstone of a Bosch painting, the otherworldliness in it made me pause. I connected with the belief that drove a man to make Hell real. Then discovered within those works a hidden hand. The absurd nature of humanity’s suffering. A dark humor. I started painting when I was 15 years old. I still find new heroes in art. Over the years I kept working. I ended up studying painting and printmaking at John Herron school of Art in Indianapolis where I earned a B.F.A. In 1985. I moved to Richmond, Virginia where I received a M.F.A from Virginia Commonwealth University. Over the many years I have maintained a practice and exhibited as an artist. Six of the artists in this show were part of the wave of artists that helped breathe life into the nascent downtown cultural awakening in Indianapolis in the 1980s and 90s. While Brian Fick, David Frye, Carla Knopp, Steve Paddack, Gwendolyn Skaggs, and Martha Vaught were making a scene with their art and lives in Indiana, Mary Gagler was beginning life and making childhood art in New Jersey. Incidentally, the group would come together to contribute their voices to this project.