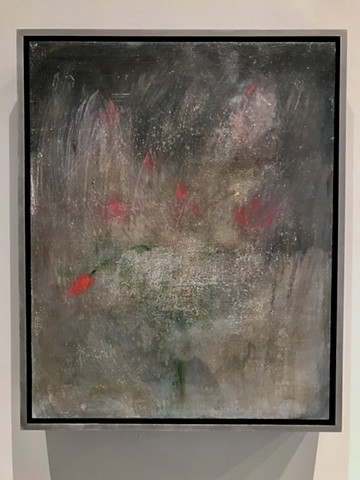 Bartering with life
< previous next >

“I brought you flowers, man.” (Bartering with life) is based on a text message sent to me by the perpetrator. I was hiding for 2 months in another state after escaping a violent episode, one which he gave me a concussion by head-butting me. For the entire 2 months he bombarded me with apologies, begging me for forgiveness, and promises to change, seek help for his abusive behavior. I agreed to meet him when I landed in New York. At the last minute I backed out. Canceled my flight. I was terrified. I had an anxiety attack. He went to the airport to pick me up, I sent him a text letting him know I caught a ride from someone else, not telling him I actually canceled my flight. He sent me the text: "I brought you flowers, man." Every time he was violent, the next day I'd receive flowers at work. While everyone admired them, telling me how lucky I was, I had to be silent. It was pure psychological abuse, trauma bonding, gaslighting. It was bartering with my life.

A closer look at the 4-part cycle The cycle of abuse, also sometimes called the cycle of violence, helps illustrate common patterns of abusive behavior in relationships. It also helps provide clues toward a deeper understanding of why people experiencing abuse often find it difficult to break free.

After the incident of abuse, tension gradually begins to fade. In an attempt to move past the abuse, the abuser often uses kindness, gifts, and loving gestures to usher in a “honeymoon” stage. This devoted behavior can trigger the release of dopamine and oxytocin, helping you feel even more closely bonded and leading you to believe you have your “real” relationship back.

To maintain peace and harmony, both parties generally have to come up with some sort of explanation or justification for the abuse.

The abusive partner might: apologize while blaming others, point to outside factors to justify their behavior, minimize the abuse or deny it happened, accuse you of provoking them. They might show plenty of remorse, assure you it won’t happen again, and seem more attuned to your needs than usual. You might begin to accept their excuses, even doubt your memory of the abuse.

This reprieve offers relief from the physical and emotional tension and pain.

You might feel certain that whatever upset them and triggered the abuse has passed. You can’t believe they’d do anything like that again.

This cycle repeats over time.

This “cycle” happens over and over within abusive relationships, though. The length of time between each repetition can vary. It often shortens over time as the abuse escalates.