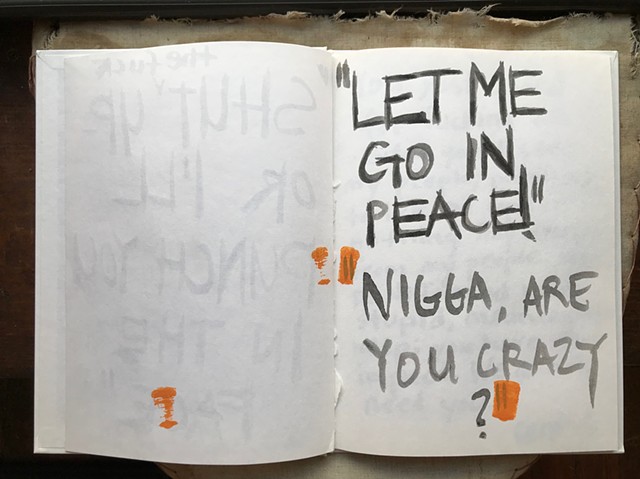 Coercive control is a strategic course of oppressive behavior designed to secure and expand gender-based privilege by depriving women of their rights and liberties and establishing a regime of domination in personal life.

The abuser wants to go in peace, hoping the victim will remain silent. In the drawing above the victim is quoting the abuser. He always said "Nigga, are you crazy". She is mocking him in this drawing. Once the abuser realized he was being held accountable for his violence he wished to “go in peace”. In the abusers mind the violence is normal. He had all the red flags and warning signs of an abuser: Extreme jealousy. Possessiveness. Unpredictability. A bad temper. Verbal abuse. Sexual abuse. Extremely controlling behavior. After a year of abuse, I spent two weeks with professionals planning my escape. Getting the perpetrator out of my home was agonizing. In the final days he sent me an article regarding the legalities and challenges of having a boyfriend removed from your home. This- after suffering his abusive, violent behavior. I remained calm. Coaxed him out long enough to get my cat, which he never noticed. The next day he sent me an email stating he was leaving, I knew he planned to return. No one knows him better than me. I had to figure him out, to save my life. On both occassions there were people looking out, letting us know when he was coming and going. It was a team effort. We had a locksmith on call. I was having locks changed when he returned. I was silent, held the lock so he could not turn it, while covering two holes from screws taken out. The locksmith was downstairs getting tools and let us know when the perpetrator left. The petition for the OOP was filed.

Sadly, he stole some items of mine. Very sentimental objects I can never replace. Like my belongings I lost in Bensonhurst, when he destroyed my apartment after I ran from his violence and when I lost everything I had in New York. Artworks from friends, clothing, sentimentals. Everything. This is why I was always afraid to run, leave him in my apartment. I was terrified he'd do the same again.