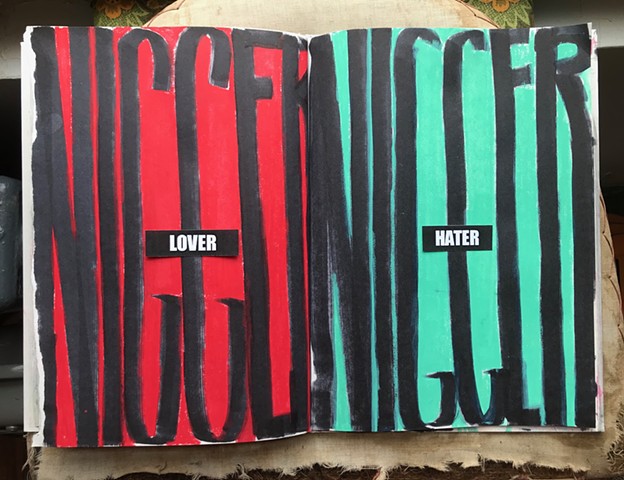 As noted in the statement for this series, I had to read through numerous emails to prepare for court, as I was petitioning for an Order of Protection. In an email dated Wednesday, June 3, 2020 at 4:31 PM, the perpetrator referred to himself as an “uppity n*****” during, what turned out to be, an angry self-deprecating rant after I ran from his violent behavior, for a third time. The periods where he couldn’t control me is when he colors me as a racist. He uses this tactic to date.

This journal entry dove into racism, social history, art history and the controversies that lie within. The trauma endured by victims of intimate partner violence can not be compared to a word drawn onto paper. A word with one of the richest, nastiest, and most complex ranges of meaning in the English language, whether painted, drawn, written or sung will resonate loudly and be a catalyst for awareness anywhere it lands, no matter how it is released. Artists continue to use art as a spark to critical conversations around universal issues. Intimate partner violence in a cross cultural relationship is complex. If the abuser is black, and the victim is white, they may often times silence the victim by calling her a racist if she calls the police or goes to the authorities. My abuser did just that every time I ran from his violent behavior. The attempts to lure me back sometimes started with promises to change. The threats would follow, or vice versa.

In this journal entry I confront the pressing issue, and his attack on my character as I finally broke free, and I strike back with full force, from the gut that was physically punched, and the mind that was once skillfully, insidiously and deviously manipulated by the violent narcissistic abuser.

The entries above reflect the words used by racists, referring to white women who have intimate relations with black men, and vice versa. With every line, curve, and stroke, I was keenly aware of the word's toxicity, and place in these times and history, as I drew each letter with my Magnum Sharpie. Pressuring each letter to fit, stretch tall and narrow to fill each page, I knew I was giving the perpetrator what he bargained for. This act does not make me a racist. It makes me profoundly aware of his tactics and schemes. This entry does not relieve the abuser of being held accountable for physically, sexually, mentally and emotionally abusing me. Like most victims, I knew the road for justice would be challenging. I knew in order for him to battle with the truth, and not face the consequences for his actions, he would have to lie, as brutally as he treated me.

I am using art to release my trauma and gain back control of my life and well being, pushing awareness of intimate partner violence, misogyny, bigotry and narcissistic abuse to the forefront.

"Through methods like these, integrating art into therapy addresses a person’s whole experience. This is critical with PTSD. Trauma is not experienced just through words."

Narcissists will find ways, take things out of context, and rewrite narratives to play victim.

Censorship, Not the Painting, Must Go: On Dana Schutz’s Image of Emmett Till

Why Dana Schutz Painted Emmett Till

*Flying monkeys (popular psychology): Flying monkeys is a phrase sometimes used in pop psychology to describe people who are acting at the behest of another (common amongst narcissist) to control a targeted individual.[1] It is a metaphor taken from the Wizard of Oz wherein the Wicked Witch of the West used winged monkeys to carry out evil deeds on her behalf.[2]

"Triangulation" is a psychology theory that examines this and other third party influences on relationships."Triangulation" is a key element of Murray Bowen's Family Systems Theory.[3] [4] I am a survivor of Narcissistic Domestic Violence. I was granted a 5 year Order of Protection. The perpetrator strongly exhibits narcissistic sociopath personality disorder.

When stepping on the path to justice and accountability, Activists face both persecution and prosecution by systems that are not just, they are political. I am not, simply, a victim speaking out, I am an Activist against violence. I am fighting for humanity. I not only represent myself but also those whose voices were stolen.

I am not a "Karen". I am a woman who was beaten down, and up, in an unimaginable darkness of evil, where I was groomed and conditioned to accept the violence, and holding the man who abused me accountable. When I escaped into the light I became more terrified than I was while in the dark. I learned who and what my abuser is and continues to prove. This is what fuels my determination to hold him accountable. He is dangerous. A ticking time bomb as he races to destroy my character and my new life. He’s doing exactly what he said he’d do if I escaped and held him accountable. He's managing a smear campaign.

Unfortunately, in order to recover from the nightmare I lived due to the perpetrator, I had to seek help, educate myself on his behavior, in order for me to understand how my life was hijacked by him, and how to recover. I now understand that I was not in a relationship with him. He is a predator. His aim was to gain access to my finances and my resources while beating me up and down physically, spiritually and emotionally, terrorizing, intimidating, and bullying me so that once he had what he wanted, he could walk away "in peace", move on to other "supply" as if we had a simple break up. The man is delusional. He almost cost me my life. I had to leave a good job, not only due to post traumatic stress disorder, but my coworkers were involved in the fear, chaos and trauma. The defendant stalked me during the first OOP in 2020.

Holding an abuser accountable can be dangerous I am free and in this for the long haul. An Order of Protection was the first step. Accountability is the next.

"Injustice anywhere is a threat to justice everywhere."